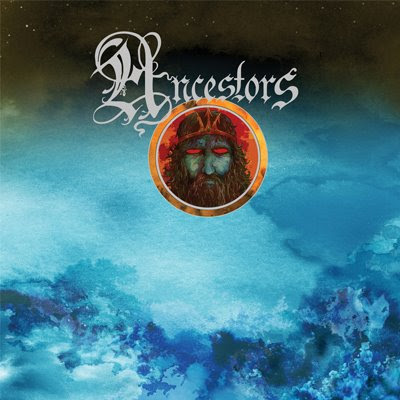 What better way to rattle off some Tee Pee with Ancestors' debut album 'Neptune With Fire'. These guys came out of nowhere and eventually started making noise after signing with the label. However it seems it wasn't until they started gigging with the heavyweight label-mates (Earthless, Witch etc.) that they suddenly exploded. Take the magic of that delicious 70's spacey psyche sound, throw in some mammoth 90's stoner/doom riffage, ala Kyuss. Add in some Gilmour solo work (circa 'Atom Heart Mother') and wrap it all up with some superb modern day production.

The album consists of just two songs-- "Orcus' Avarice" is over 16 minutes, the title track is more than 20-- and both serve as launching pads for extended jams. It's the kind of lumbering meganess that easily turns on a dime. So by the time the drums have reeled in, and the guitars ascend into outer-space, it's hard to recall the tumult that came only moments before. Ancestors, able to do more than whip up a simple fervor, spend just enough time inspecting the same guitar scale and a slippery blues bassline that gradually builds to climax.

Their debut LP, Neptune With Fire — a conceptual, two track record with a title track that tells of a metaphorical character and his cosmic, psychological ordeal through war, celebration, remorse and revelation — was released in August 2008. Artwork for the record was delivered by psychedelic visionary Arik Roper, the artist behind such record covers as Sleep's Dopesmoker, and Earth's The Bee Made Honey in the Lion's Skull.

Can't wait to see what these guys do next.

Hey, I play in Ancestors. Just wanted to say thanks for the kind words. Glad people dig the record. Keep your eyes peeled because we're going into the studio in 3 weeks to record our follow-up and if you ask me it's sooooo much better than Neptune (which I'm not even entirely stoked on). Anyway, the new album will be out in October, so spread the word!

Thanks for the comment, and visit man! One upping Neptune sounds like a tough feet, and would be awesome. I'm sure you guys are up to it!

marcus, this is STONER the way me likes it!!! bitsof Kyuss, Earthless and sometimes it even reminds me of a Hermano concert I saw... thanks for keeping this part of my life alive! A tip from me to you could be Sienna Root, ever heard of these guys? Sounds like 1971 (or 2,3 or 4) allover:-)
I have bothe the CD and the lim. edetion clear white vinyl, highly recommended stuff! let me know if you're interested.
peace, E-mile

I'm checking out some Sienna Root now, awesome stuff! Thanks for this man.