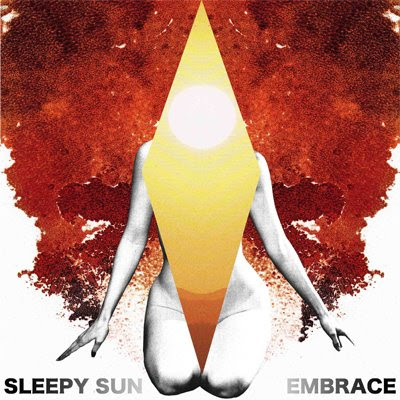 First of all, this fantastic album is not on the Tee Pee label, nor is the band all together. I thought i would post it anyhow seeing as through Tee Pee and The Assemble Head in particular, i discovered their wonderful music. Just another reason i am itching to get my hands on the new Assemble Head is that these guys contributed on one of the new tracks titled "Two Birds".

Sleepy Sun is an apt title for this young San Francisco sextet, as their debut record, “Embrace”, is one of those rare slabs of rock and roll that will wake you up in the morning, and send you off to sleep at night. After honing their craft in the occult influenced creative community of Santa Cruz, the band has continued to grow, both creatively and in their loyal following, since their relocation to the city by the bay. With their throbbing rhythm section, swirling sea of guitars, and dreamy, haunting duet vocals, the word dynamic is a severe understatement.

Though the press is quick to rifle off a laundry list of rock’s greatest ghosts to describe their sound, one live show is all you need to know Sleepy Sun have stumbled upon something very much their own. Having performed their raw, high-energy show on stages shared with acts such as Howlin’ Rain, Earth, Dead Meadow, and Citay, they are quickly establishing themselves as a very tough act to follow. Fans at shows are known for shouting the band’s battle cry, “Let’s get weird”. If the group continues down their rapid road to success, things are about to get very weird indeed.

Link removed as per request [ATP Recordings]
This is an excellent band folks, check them out here:
http://www.atpfestival.com
http://www.myspace.com/sleepysun

this is a great album, and im sure they will sign to teepee very soon, as pretty much all of the great new psych bands do. eagerly anticipatin that new assemble head....as well. hope its here tomorrow. thanks man... cheers

Played with them a couple weeks ago. I kinda found their album a little disappointing after how much they blew me away live.