I Have Sleepy Sun Fever! 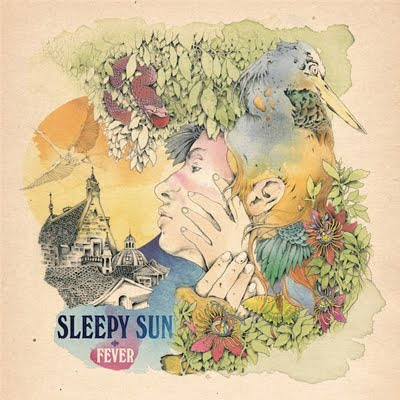 "Their first release on ATP records Embrace illuminated the golden path to Sleepy land—hard-riffing, delicate, dreamy and cultivated. The latest ATP release, Fever, is arrival at the palace the path promised."

Any regular reader(s) of this blog should be well familiar with this wonderful Californian group by now. They would also know just how much I personally love the band. I've told the story a few times already, but here it is again. I stumbled upon the band's debut 'Embrace' completely by chance, after learning of the bands working relationship with one of my other current favourites, Assemble Head in Sunburst Sound. In a desperate move to hold off and momentarily distract myself from my heightened anticipation & waiting of 2009's 'When Sweet Sleep Returned', I decided to pick up SS' 'Embrace'. Immediately, and i mean fucking INSTANTLY (as the wild drumming of 'New Age' kicked in) i was hooked. I must of played that record an even 50 times or more in the space of 2 or 3 months. It was an insane obsession that didn't let up, obviously.

I've been tracking the group for any news on the follow-up album over the last few months, and finally It's all starting to surface. Check out some of the descriptions and reviews I've found, hopefully they excite you as much as they do me. And finally, below are a few videos of the new tracks performed live by the band over the last year or so. I've listened to the youtube clips of 'Wild Machines' so many times the song hardly feels new to me. 'Marina' ain't bad either, that video of them playing it @ Primavera was incredible. The tribal breakdown at the end, and then when the jam kicks back in.. as well as Rachel's dancing haha, everything I love about the band right there. If pressed, I'd say those two are my favourite tunes from the band to date. I can't wait to hear how they sound from the studio-side, just another reason to be excited for record No. 2, 'Fever' - due out out 17th May (UK) & 6th June (US).

It's actually my birthday on the 4th of June, so i could very well have a nicely timed & tasty gift coming my way. This is going to be special folks!

Yeah, Marina is probably my favourite Sleepy Sun song from both albums (even though I havn't found a leak of Fever yet I've heard the all, or a majority, of the new songs live). Hope it sounds as good on the album as live...Cheers for linking to my video by the way! Take care!

have any chance of reup the link
aureliomartins76@gmail.com
thanks from Portugal

Sorry, Not uploading this album (at this time at least.)

Will also say that i have now heard "Fever" a few times and it's incredible! Early favourite is Desert God. Magical album so far.

Thanks for sharing this helpful post about the topic "I Have Sleepy Sun Fever!" in the Sometime-World blog.
Great article it very informative have a nice day. Some great stuff im coming across here. Thanks for sharing here.

I just discovered your blog and just wanted to tell you good job. Hope to see more great music soon.

After months of listening to this in MP3 format, I finally purchased this amazing CD.

Hi, Nice post thanks for sharing. Would you please consider adding a link to my website on your page. Please email me back.

hello? is Anybody here?


i was shock and heart broken few months back when i found out my husband cheating was on me with with some from hiswork We’ve been married going on 4 years. 2kids. lots of amazing moments together. i want to leave, but i love him so much.he has to see her everyday because they work together. we are both still young and very attractive. but i want my husband, my only friend, and the father of my beautiful children. how do i get past the thought of another woman having taking my husband from me? Not my fiancé, not my boyfriend, but my husband! i still love him even though he thinks i want to leave i really want him to do better and stop me before i walk out! my husband told me that he doesn’t feel loved anymore, just because of lady he is seeing at work... and he wants a divorce, i was devastated, heart broken i begged him to listen to me that we can work it out like we always do, but he didn’t listen, he told me that he met someone that loves and understands him, i begged him to consider our kids but he’s did listen. he left and i was frustrated, i began searching for help and answers, then i good testimony about a man that can Cast a spell to remind him of all the things we have been through together and make him fall 100% in love with me again, at first I was scared but i decided to give it a try, and like magic my husband is back to me, apology and begging for forgiveness,my marriage is save and my husband is showing me love more then ever before, happiness is back in my home all thanks to this Genuine man prophet ogidi of MIRACLECENTER110@GMAIL.COM.