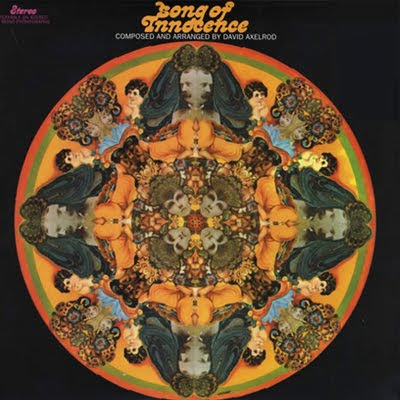 What started out as a jazz/rock experiment throw-away, decades later reveals itself as a lost classic. Along with Miles' work at the time, this was a very early example of the sound that would later become Jazz Fusion. Producer, arranger, and engineer David Axelrod made his mark with Cannonball Adderley, Lou Rawls, and the Electric Prunes. Song of Innocence made critics turn their heads in its day, regarding it as a visionary curiosity piece; today it's simply a great, timeless work of pop art that continues to inspire over four decades after its initial release.

After forming a band with a couple of yer typical garage-rockers of the time, Axelrod signed with Capitol and this masterpiece was his very first release. An instrumental concerto based on the works of William Blake, 'Song of Innocence' is entirely unique: neither Rock, Jazz, Classical, nor Easy Listening, the album blends elements of all four into a richly layered whole. While this may sound like a potentially pretentious train-wreck waiting to happen, nothing could be further from the truth. This is simply one of the most unique musical efforts of the last several decades. Distorted guitars, funky bass lines and drums that were shockingly loud for 1968, blend with churchy organ and symphony-size orchestras on songs like 'Holy Thursday' and the epic closer 'The Mental Traveler.'

"Imagine if Brian Wilson had suddenly decided to turn SMILE into a prototype for Isaac Hayes's soundtrack to SHAFT, and you're halfway there."

We refer to it as "Analog Music from a Lost World" -- previously unreleased post-punk experimental rock from 1981, unlike anything else recorded before or after.

"It’s out there but a really good listen...some awesome experimental work." — Richmond Playlist

"It’s challenging music made by a collection of people who know what the f_ck they’re talking about when it comes to records...fantastic record...holds its own unique feel and straight weirdness. What more could you want?" -- anuncontrollableurge.com

"...enjoyed it immensely! Odd, odd sounds, but funky in a twisted way." — snapcrackleandpops.blogspot.com

"...a comment i had from an anonymous friend made me to move my old fat ass and write about this unique lost treasure, post-punk mixed with avant-rock, filled with spastic rhythms and synths in a very New York-ish manner, something like a No Wave Beefheart, if he was a female..." — buginthecity.blogspot.com

"Once again, those lovely folks over at WFMU beat us all to the punch with another chunk of previously unknown avant/post-punk brilliance circa 1981, proving that no matter how much you root around, there's always another truffle waiting to be dug up..." -- nonotnyet.blogspot.com

"It reminds me at times of early Sonic youth. To be honest I love anything which contains deranged female warblings. You can listen to or download the whole thing from the Free Music Archive website. Well worth an hour of your time." -- burningworld.blogspot.com

"...some hefty grooves, and plenty of 'holy shit" moments'. It's a spacious but highly rewarding listen, and I wouldn't be surprised if some label makes an effort to press this on vinyl in the near future." -- ongakubaka.blogspot.com

Jason Sigal, Managing Director at WFMU said:
"This is amazing stuff and we would be honored to feature it in wfmu's curated portal on the free music archive. I'm very sorry for our slow response, we have a lot of stuff to wade through to find gems like these."

This is great stuff but I'm not sure how far I'd place this in the "out there" category. A lot of it reminds me of a pop/rock mutation of Ennio Morricone's sound. Very cool soundtrack-esque music.

Hi! Im Pato, the bass player from argentinian sludge duo Cabrocordero, and I want to let you hear our first EP called Ofrenda Inicial.
It would be great if you could upload our link to your blog so that people interested in the genre can know our music wherever they are.

Heres the link: http://www.megaupload.com/?d=3C6Y2GI0
The file contains info, pictures and flyers of the band to.

I hope you like it and enjoy it as well. Best!
Pato

To start with I would like to congratulate the creators of this blog, mainly because when I read it I enjoyed it very much.A few years ago I attended a conference called guanacaste costa rica real estate, at that conference had many interesting topics. Perhaps readers may find no relationship between the blog and this conference, but if someday can attend,would realize that there is much to do with this blog.

Hello .. firstly I would like to send greetings to all readers. After this, I recognize the content so interesting about this article. For me personally I liked all the information. I would like to know of cases like this more often. In my personal experience I might mention a book called Generic Viagra in this book that I mentioned have very interesting topics, and also you have much to do with the main theme of this article.

Love this album and the follow-up! Just posted about this on my music blog too.

Great album, great music, kinematic, climatic, it´s music of old times, and this is a compliment. thanks for posting!