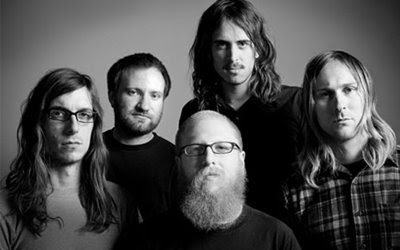 At last, an update on one of my most anticipated releases of the year! The folks in the Ancestors camp recently had this to say:

"Ancestors have announced they will release the follow up their critically acclaimed debut album "Neptune With Fire" on October 6th. The brand new album will be titled "Of Sound Mind".

Lyrically and thematically, Of Sound Mind contemplates the quandaries of human psychology and its effect on and within the development of modern society. Although essentially conceptual in nature, the record is a blatant transition from the allegorical and mythological framework of their debut Neptune With Fire. The 8 part, 1-hour plus album lends meaning, while actively seeking answers, much like the work of Camus or Thoreau. Without absolution or authority, Ancestors insight a thought crusade with meaningful intent.

ANCESTORS - OF SOUND MIND Tracklisting
1. From Nothing
2. Mother Animal
3. Not The Last Return
4. Bounty Of Age
5. Friend
6. The Trial
7. Challenging
8. The Ambrose Law"

If that wasn't enough to get excited about, the band's very own guitarist, Justin, left a comment with regards to their new stuff a little while back:

"Hey, I play in Ancestors. Just wanted to say thanks for the kind words. Glad people dig the record. Keep your eyes peeled because we're going into the studio in 3 weeks to record our follow-up and if you ask me it's sooooo much better than Neptune. Anyway, the new album will be out in October, so spread the word!"

Cheers for the comment and visit Justin! One-upping Neptune sounds like a tough feet, and would be awesome. I'm sure you guys are up to it! I wonder if Arik Roper will be involved again. Can't wait to get my hands on this one!

Check them out: Tee Pee Records - Myspace
Posted by Marcus at 7:18 PM