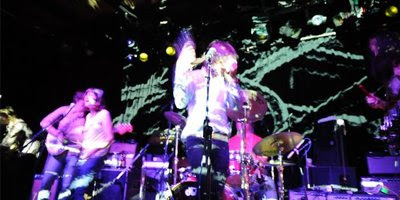 Two of the finest bands to emerge from the 21st century San Francisco psychedelic renaissance—Assemble Head In Sunburst Sound and Sleepy Sun—will join forces this September for a three-week, coast-to-coast freakout. The tour, which officially kicks off in Providence, Rhode Island on September 17, will cover 17 dates in New England, Canada, and the Midwest before winding up October 4 in Portland, Oregon. Both bands will also play dates in New York City in the days leading up to the tour kickoff.

The cross-country caravan unites the two bands in performance for the first time outside of California. But they have already joined forces for several epic throwdowns in Northern California—including an upcoming July 31 Big Sur date with Dead Meadow—and worked together in the studio, with Bret Constantino and Evan Reiss of Sleepy Sun lending harmony vocals on the latest Assemble Head release When Sweet Sleep Returned. Heaven knows what mayhem will unfold on this road ramble.

Assemble Head in Sunburst Sound’s third LP—and second on Tee Pee Records—When Sweet Sleep Returned, has garnered its share of raves. And the new album finds the band moving outward from its foundation as a garage-and-Floyd-inflected heavy psych combo into sunnier, celestial, and soulful territory that conjures ghosts of Spiritualized and the Byrds while serving up molten slabs of wrecking ball, White Light scuzz n’ roll. And in performance, the band ranges from high-energy fuzz thuggery to delicate reveries peppered with flute, 12-string guitar, and boy-girl harmonies.