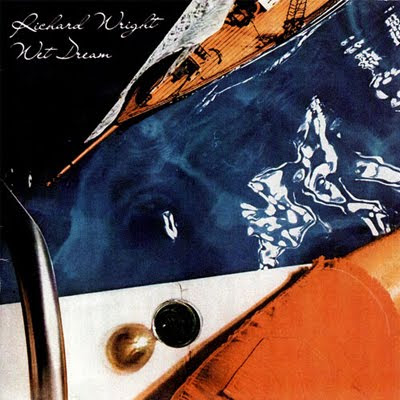 At this point obviously Richard needs no introduction, we're coming up to 1 year since his passing. Thinking on that got me listening to this amazing album again recently. I'm not usually one for over-comparisons but 'Wet Dream' certainly ranks high amongst the other solo member's own albums. Out of all of them it probably demonstrates the most accurate display of that good old "Floydian style", if there is such a thing.

The album is richly laden in deep textures of prog and jazz, and it's all spaced out so beautifully. Kind of a strange thing to say, but i think some of the direction that went into creating the score for the video game Super Mario Galaxy was based on Rick's playing, and perhaps some stuff from this record. Just a feelin', ya know! Besides Rick and his amazing-as-ever performance here, Mel Collins is on fire! Some of his best work i've heard. Snowy White chips in on both acoustic and electric guitars (the man behind the rare Pigs On The Wing solo) and does a fantastic job.

If you're a fan of the band or 'Dark Side' in particular, you should already have this. It's really amazing to learn just how much of Rick's style and direction contributed to the Floyd sound we all love. This record, trunk-filled with emotions is very telling of this. R.I.P.

Very laid back and chill album... Wrights playing is distinctively his own and this fits in well against some of his material on Atom Heart Mother, Obscured by Clouds and Dark Side of the Moon

nice post, never knew about this. good stuff. thanks.

Thanks to you ! I listen to good music.

Thx for this amazing albun. Rick, a big star in heaven !