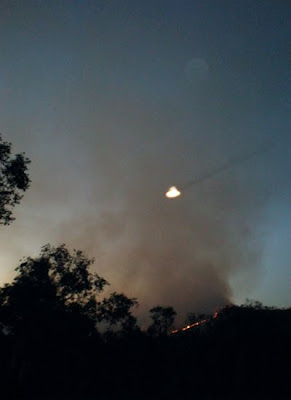 Strange picture eh? Let me explain. Two or three times a year we get these bush fires throughout the hills surrounding our humble abode. Decided to snap some pictures of them while playing around with a few exposure and flash settings. Whatever that 'thing' is, it was invisible to the naked eye. Only did i discover it upon uploading the images to my pc. I'm pretty sure it was a bug that flew past my frame, 300mm or so away from my lens. Whatever that path line behind it is.. really sells it. Pretty cool isn't it? i actually have the President on hold while i fudge up this post. If the government want to sit on this at least my faithful readers will know!

So what else is new? Have not posted in a few weeks, coming soon. Black Bonzo released a teaser video for their upcoming album "Guillotine Drama", due out September 19th. Can't wait for that one! Elsewhere, i really hadn't ever heard anything from the Arctic Monkeys. Decided to give their new record a spin and was pleasantly surprised. Josh Homme produces, and boy.. is it obvious! Also been frequently playing the new Imaad Wasif album, amazing folk/psych rock. Label? Tee Pee, of course. And lastly, Rory Gallagher's debut album is so damn good. Had it heavily in the rotation last few weeks. A true classic!

That's all for now, i better go check on that fire before i burn up.

beam me up scotty! nice pic marcus.
keep your ears pealed for this one:
http://www.sienaroot.com/home/?page=news