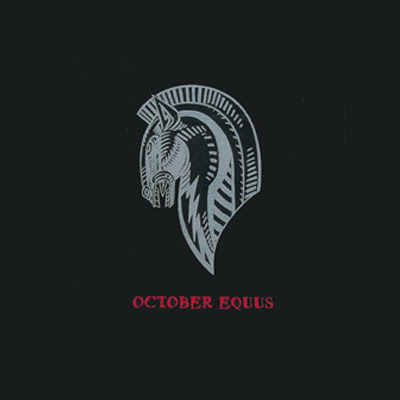 Now get this.. they took their name from a pagan festival celebrated in ancient Rome in the middle of October. During the festival, the two groups of people who lived in the city would go to another city and have a chariot race, two horses per chariot. The winning team's fastest horse was then beheaded, and the head put on a pole. The two sides would then violently fight each other to try to get the head. The winning side would go back to the city victoriously and mount the head in the tower or palace, where the skull would remain until they started the festival over the following year. Essential information right?

This is an awesome debut album by a Spanish band that reveals itself as a mature avant-garde prog force. The repertoire is full of sinister motifs and moods, usually with the guitar taking center stage while the keys lay disturbing orchestrations and ambiences (mixing the likes of Univers Zero, Gentle Giant, KC & VDGG.) It is all held together by a rhythm section that moves proficiently through the complex dynamics of all ten tracks.

This group has their second album out this year and i can't actually find it. If anyone could post it in the chatbox or in the comments section for me i'd gladly post it for everyone. Very interested in hearing it after this amazing debut!

Thank for a great album & a brillant new site