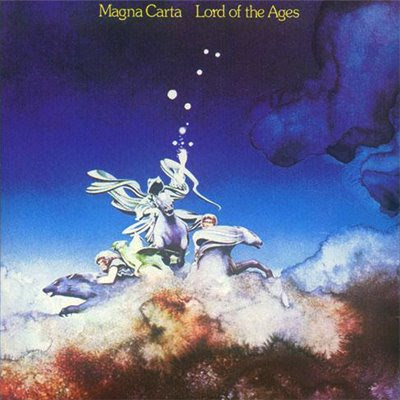 Ah, now this is a fantastic folk-rock record. Magna Carta’s music is largely inspired and influenced by the folk of Simon & Garfunkel, focussing on soft and gentle acoustic music, often with a traditional feel and great vocal harmonies. They were part of the early progressive wave, but without actually fully stepping into the progressive realm. I'd say people only add that prog folk tag after seeing the totally awesome Roger Dean cover (See the pictures on the right hand side of my blog) as well as the nature of some of the lyrics.

"Two Old Friends" is one of my all time favourite songs, you just have to hear it - great writing and absolutely stunning. The title track "Lord of the Ages" is truly Magna Carta's epic. It starts off as soft acoustic piece as the verses are spoken over a beautiful melody, with a haunting sung refrain. The theme is vaguely theological, being based on the Book of Revelations and the musings of Nostrodamus. Book of Revelations? Nostrodamus? How is this not prog!? As the track develops, the serene atmosphere is suddenly broken by a lead guitar burst. This introduces a much harder, rock based section that actually sounds quite like The Beatles at times.

They have another good record called "Seasons", but other than that they would never really reach the high point they hit with "Lord of the Ages". Any lover of folk will appreciate those tracks i mentioned, check it out!

"GATHERING IN THE HARVEST."

Beautiful - Thank you.
Haven't heard this since my turntable died !
geoffc

Thank you for your great work!

Discover the latest posts from your favorite music blogs at one place!!

check out youtube - somebody put together a great battle sequence from Lord of the Rings: Return of the King with Lord of the Ages as the soundtrack - quite an excellent fit.