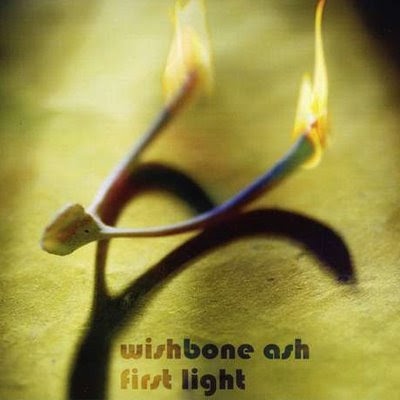 When it comes down to it, Wishbone Ash is really 'the' band for me. 'The' band being the one that opened my ears to all of the stuff i listen to today. 'The' band that interested me in wanting to hear more and more, and collect more and more. But most notably Wishbone Ash is to me, 'the' band that epitomized the blending of blues based heavy rock with the common elements found in Progressive Rock.

"First Light" is what very well could of been WA's debut album. The recording was made with only one purpose in mind, to get a record deal. But as the band signed with MCA Records (with the support of Ritchie Blackmore of Deep Purple fame) they decided to re-record most of them. While perhaps less polished than the first MCA recordings, one can hear the experimentation here that led to that later work. The sound quality is suprisingly good, with a certain raw energy that gives the music a very fresh sound. The album as a whole represents the band in their first stages of their creation.

In 2007 this seemingly forgotten Wishbone demo was discovered and released. It is an excellent little gem for Wishbone fans, and i would probably even recommend it as a starting place for newcomers.

So you started with the shit music. Really not a great beginning!

are you kidding? i mean sure the sound quality, whilst very good is still not as good as the self titled debut.. but the raw talent and power here is absolutely amazing!

As "Sometime World" from WA is my all-time favourite song (i still can't explain why!!!), i'll be happy to listen alternate or live versions of this song : i'm sure you're the good guy that ask (seeing the name of your blog of course). Would you have some and could you post them ?

No problemo, glad you enjoyed it!

"Sometime World" is evidently one of my favourite WA tracks also!

I've just checked and suprisingly enough "Sometime World" doesn't appear on any of the live albums i have. I have a few good live ones as well as a few excellent bootlegs from the Argus era. As i said they actually don't have "Sometime World" on them, but what is their is great, so i will post that for you eventually!

Thanks for your answer!
I have some lives from WA but the problem is that I don't have any with "sometime world" too...
My lives are:

Anyway I'll still be happy if you could upload one other live.

And the search for a live version of "sometime world" continues...
:)