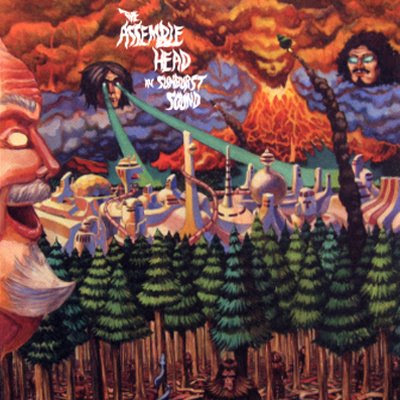 Anyone interested in the retro/heavy rock releases from the awesome Tee Pee record label (Earthless, Ancestors, Witch, Graveyard, Titan) should get their hands on this little scorcher as soon as possible! With roots clearly in the psychedelic rock scene and influences such as Pink Floyd, Crazy Horse, Sabbath, Iron Butterfly, The 13th Floor Elevators & Blue Cheer, The Assemble Head is a band that might have better fit in the music scene in 60s.

This major label debut successfully merges the styles of some of the mentioned bands above into one ass-kicking experience. "Mosquito Lantern" for instance, is built around an Iron Butterfly-ish hard rock riff while "A Bourbon for Rudy" is even more blues-based, and bleeds straight out of the brighter "The Corner Zombies". In contrast comes the darker "Occult Roots" a song that slips right into Sabbath's satanic realms, while the blistering "D Brown" boasts Hendrixs-esque guitars early in, but swiftly settles into a delicious Creamy jam!

As with such groups as Comets on Fire or Dead Meadow, the individual elements of the Assemble Head's onslaught are less important than the music's overall cumulative wallop. It’s the kind of music that asks you to just sit back and let it all wash over you. Highly recommended stuff, god bless Tee Pee!

i agree ..great heavy rock..a cult album if ever..
thanks Mate