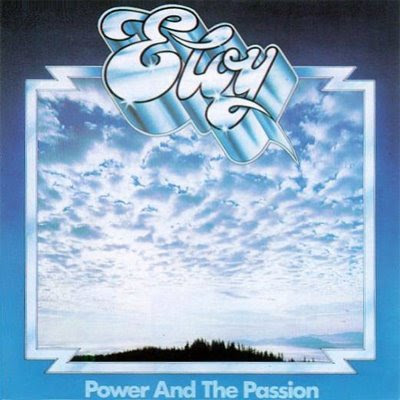 I think i'm kind of alone on this one, but "Power and The Passion" stands as my favourite Eloy album. This is the album where the band thought they needed to do away with the then limited hard rock style and focus on a more symphonic prog sound. Although they would go on to further develop this new sound on albums to come, "Power and The Passion" still mixes in some of their earlier psych hard rock beginnings which gives it a very unique balance. 1973's "Inside" might just be my second favourite, as you can tell i prefer that early lineup.

Unfortunetly this would be the final album from this band lineup thanks to difficulties with the the producer, Jay Partridge. The album wasn't selling too great but was still enjoying moderate success in Germany. The record company decided to give band leader Frank Bornemann a second chance. He went on to ressurect the band with new members and perfect the sound he was playing around with here.

"Power and The Passion" is an excellent mix of slowly moving space rock and full on hammond/guitar hard rock. It's a concept about time travel, society and romance, the playing is absolutely phenomenal and dare i say it again, it is the finest album in the Eloy catalogue.

No you're no alone.... I love this one too!
Dominic

Hi man!
You really not alone!
This is my favorite too.
I´m a brazilian wishbone ash's fan and i discovered yer blog by the name.I love this song.I have a blog too www.rocklaro.blogspot.com/
I'm looking for by the wishbone ash's tribute(WISHBONE ISH 2005).
If you have it please send me a link.
Thanks,
Paulinhoclaro by ROCKLARO

You're not alone, I'm listening to this again now as I type and it's a great album. Eloy produced some great music over the years, this is one of their most consistent records. Keep up the great Blog! Cheers.

Great Site!!
I have been waiting to here these albums again . . . I had a lot of this stuff on vinyl.

It would be greatly appreciated!!

Eloy will be back on stage this summer - check www.eloy-legacy.com