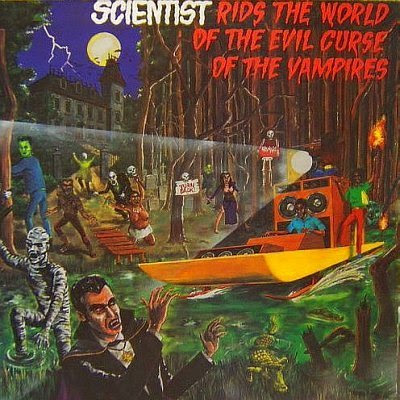 Hidden behind the corny and yet awesome album cover is some pretty groovin' stuff here. Scientist (born Overton Brown in Kingston, Jamaica) came to prominence in the early 1980s and produced many albums, his mixes featuring on many releases in the first part of the decade.

Many fans came to know his music due to half of this album being used on the soundtrack for the popular videogame Grand Theft Auto III. However, Scientist received no royalties for this and sued Rockstar Games unsuccessfully in a US court. The court ruled that according to precedent a recording mixer was not considered the author of a musical work, and so Rockstar were correct to treat the producer Henry "Junjo" Lawes as the copyright holder of the album. It can, however, be argued that Scientist was introduced to a much larger audience as a result of the licensing of his album to Rockstar, in which case he may have sold more records.

In a genre i'm relatively unfamiliar with, Scientist kicks ass!

Marcus, many thanks for WA's First Light! What a beauty! You've made two Bosnian WA lovers oh so very happy! Cheers!

this one's great, much different then '...meets the space invaders'