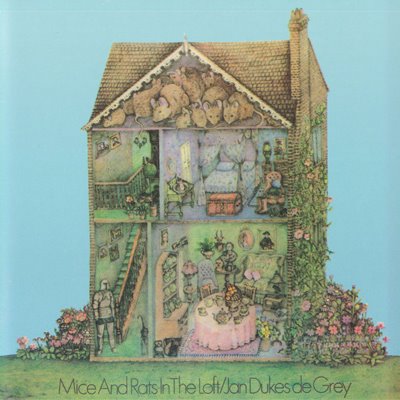 Jan Dukes De Grey are a forgotten relic of progressive music. Their brilliant free-form album "Mice And Rats In The Loft" was the pinnacle of their musical expression, a semi-improvised journey into madness.

The album opens with the awesome 'Sun Symphonica' which embodies everything that was excellent about this band. Starting rather lighthearted, bracing you for the sonic assault soon to be unleashed in your mind. Lots of clever instrumental work and 12 string strumming, Noy and Bairstow create a spiraling maelstrom with many different instruments including saxophones, flutes, trumpets, trombones, even a zelda chord. All made with the help of a backing orchestra, which gives the music a symphonic and epic feel. A more sinister atmosphere is revealed halfway through the song, describing the beheading of a young girl, made even more disturbing by Derek's theatric voice. An intense instrumental section kicks in after this, and we are taken on an incredible improvised journey. The song then reprises the beginning, but in a negative light.

The album never does return to the intensity of Sun Symphonica, but the last two tracks are still excellent. Highly recommended for fans of Jethro Tull, Spirogyra & Comus.

have not heard this album in years. look forward to hearing it again. thank you for sharing. i remember the particular combination of instruments to be somewhat unique sounding (at least to me).