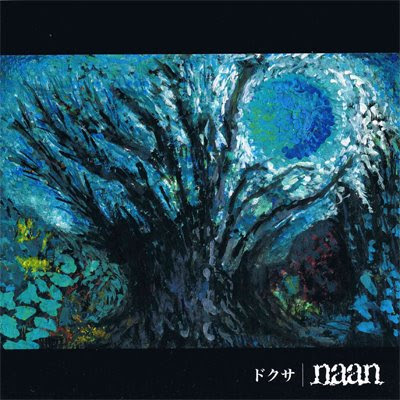 Now to be honest with you, i don't know jack shit about Post-Rock. It's not as if i dismiss the genre as a whole, because there are a handful of bands i do enjoy (see Mono a few posts below.) But for the most part the middle is filled with too many uninspired, mediocre bands that i just find too boring. Maybe i don't get it? Am i so out of touch? All i know is i like what i like, and i damn sure like Japan's Naan, and their debut 'Dokusa'.

I took a chance on this Japanese band. Initially while not expecting much it turned out to be most excellent! It's more or less a fusion of Japanese and world sounds, loaded with lots of blaring sax and ethereal flute work. There are also the occasional falsetto vocals near the climax of the song but are used very sparingly and tastefully even though they remain a mostly instrumental band.

If you are like me and don't really get the whole Post-Rock thing, take a chance with this one. You will be pleasantly suprised.

I remember seeing this album art some time ago but never heard the album...

Going to czech this, gracias.

Hi again. My new site: http://chrisgoesrock.ucoz.com/ . See you all in there. //ChrisGoesRock