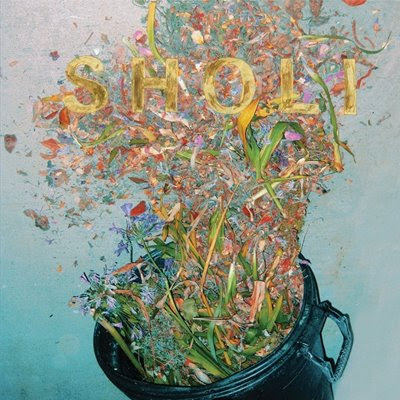 Ah yes, this is exactly what i was looking for. Not in the sense of this exact album or band, but in the sense that some unheard of band like this would jump out and absolutely blow me away in the early stages of 2009. It's my favourite album of the year by a new band thus far. I assume they are relative unpopular simply because i don't read of any noise being made of them anywhere (as well as this obviously being their official debut.)

Some would carelessly tag this as indie garbage but that simply isn't the case. The musicianship and songwriting is very unique, with each song comes a lovely melody as well as an excellent aggressive drive. Their style is balanced, emotive, hypnotic and intelligently composed. It's not as if other indie artists never get it right like this, but rarely do you get a band that strips indie of its bombast and production gimmicks and replaces that with instrumental interplay and musicianship.

Clearly Sholi can't be cornered by their influences and similar artists, as their sound has incorporated a range of familiar instrumental tactics without any of the associated baggage. The songs are certainly ecstatic and enjoyable, but with a level-headedness and reserved quality that similar bands forget during epic wankfests or heart-on-the-sleeve vocal performances.

Oh, and i didn't even mention the drumming on this record. Good lord, just download and listen to the dude tear it up! This will be in my top 10 at the end of the year, for sure!

Thanks for this, I agree great musicianship, the first track is like 4 different songs crammed into one.

It's funny you should mention that John. The first time i heard the track 'Spy In The House of Memories' i too automatically thought of KC. The contrasting light and heavy sections reminded me of 'The Letters' from 'Islands'.

What an amazing young band these guys are.

This is great. Thanks Marcus!
I'm not sure if we're up to par with this, but if you would like to scope out another "unknown band", here's a link to my band's record.
http://www.mediafire.com/?jtm22fjomlw

A bit of shameless self-promotion, I know, but I really dig the blog, so I figured you may dig this. Thanks nonetheless!

Hi nice Blog.The self hypnosis mp3 hypnotic induction is an extended initial suggestion for using one's imagination, and may contain further elaborations of the introduction.

Would you be able to upload this again, by any chance? It's IMPOSSIBLE to find anywhere. Thanks a lot!

Thanks for the amazing find.